Lessons from Six Years as a Jewish Big Pal

There is no manual for growing up. But sometimes a dedicated mentor is even better.

Andrew and Tayo were matched over six years ago through the Jewish BIGPals program at JFS. Tayo was a shy eight-year-old, whose moms wanted him to have a positive male role model in his life. Andrew was a young adult looking to make a meaningful difference in the city where he grew up and graduated college.

The journey that followed has been transformative for both young men.

“The first time I saw Tayo, he actually hid under his bed,” Andrew said.

“Now, he’s in high school, and I’ve really gotten to see him grow. It used to be that we’d go out to eat, and he wouldn’t even be able to order, but now he’s much more outgoing. He’s really become a confident kid throughout the years”

Building the strong, meaningful relationship they now enjoy has taken real commitment–one outing at a time. Over the past six years, Andrew and Tayo have gone kayaking, visited the Humane Society, tried indoor trampolining, and even attended Comic-Con. When asked about a favorite memory, Andrew said raising the Torah at Tayo’s bar mitzvah was a moment he’d never forget.

As Andrew and Tayo’s relationship developed, Tayo began to open up about important decisions.

“Tayo used to be really involved in youth theater, and he was thinking about not continuing it, so I talked to him about the importance of staying with it,” Andrew said.

“I figured maybe his friends were telling him, ‘It’s stupid. Why are you doing theater?’ So I tried to spin the positive. I asked, ‘Are your friends involved in anything?’ And he said, ‘No, they don’t do anything.’ So I said, ‘Look, you’ve already got a leg up on them. If you’re trying to go to college, you’ve been doing this for a few years, so you’re already ahead of the game.’ I just tried to keep him motivated to continue.”

Tayo did stay involved. In fact, he recently played the part of gatekeeper in the J-Company production of Once on This Island at the Lawrence Family JCC, and Andrew was in the audience.

“Tayo was a shy kid, so seeing him up there acting and dancing–that’s a huge step,” Andrew said.

Tayo agrees that Andrew has had a huge impact in his life.

“I definitely see him as an older brother,” said Tayo. 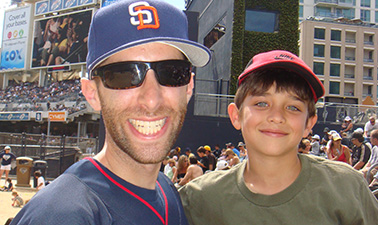 Though he said he doesn’t remember hiding under the bed, Tayo did admit, “At first I was kind of nervous, but now conversation is a lot easier and more free-flowing.”

For Andrew, who facilitates a teen leadership program at JFS, building a relationship was Tayo was an instructive experience in being persistent.

“For anyone who wants to be a part a mentoring program, one thing people will always question is, ‘Is my Little Pal still interested in hanging out to me?’ Sometimes there might be long periods of silence or questions without responses, so it can be hard to tell if you’re making a difference. But if you stick with it and you’re consistent, there will be changes.”

Tayo concurs. “It has definitely been a very good outcome for me. Without Andrew, my life would be completely different.”

Jewish Big Pals like Andrew are caring adults age 25 and older who mentor children ages 6-16 from non-traditional or single-parent families. Big Pals help their Little Pals develop self-esteem, Jewish identity, and lasting relationships that can change their perspective on the world—and make a big impact in their lives! To learn more, visit www.jfssd.org/BigPals