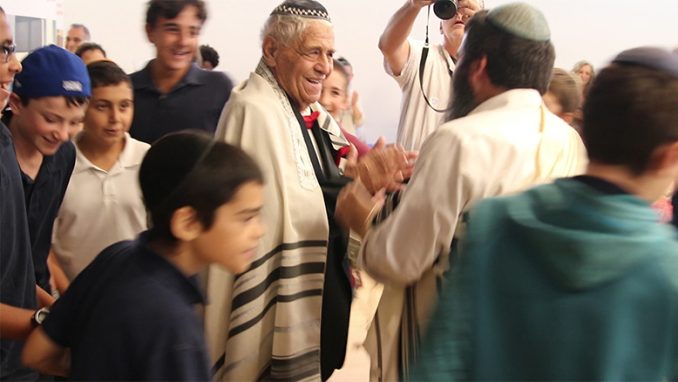 Lazar speaks five languages, holds a Ph.D. in marine biology, and is a proud great-grandfather. But even with all of his accomplishments, there was something missing from Lazar’s life. Growing up in the Soviet Union during WWII, Lazar was never able to have a Bar Mitzvah. Being Jewish in a communist country meant begin persecuted, and a Bar Mitzvah simply wasn’t possible.

“The communists came, and there was no more religion. There was not even a question of my having a Bar Mitzvah.”

Lazar’s journey with JFS began when his parents emigrated from Russia in 1979. Lazar waited patiently and finally secured a visa to visit them in 1989. Once here, he couldn’t imagine going back. With JFS by his side, Lazar found steady employment and housing, and was granted political asylum. He worked and saved for three years to bring his wife and daughter to join him.

These days, Lazar is a regular at the Balboa Avenue Older Adult Center. When the staff and volunteers heard his story, they decided to do something. After weeks of planning, and a full 75 years after his 13th birthday, Lazar became a Bar Mitzvah at the Joan & Irwin Jacobs Campus.

With his family and friends from the Center in the audience, Lazar took time to remember those who could not be there — his wife and father, and the extended family who never made it out of Russia. He said he hoped they would be proud.