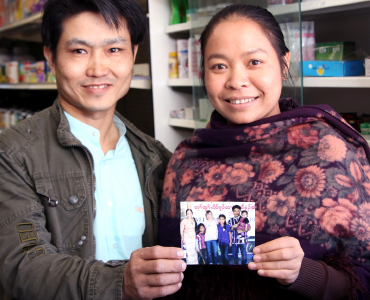 The invasion of Ukraine has resulted in a humanitarian crisis in a region already overwhelmed by internally displaced people, refugees, and asylum seekers. We anticipate the increased number of Eastern Europeans coming through our shelter will continue, as seeking asylum at the southern border is the only option available to many in the short-term. In the coming days as the plight of Ukrainians and other Eastern Europeans continues to unfold – among many other conflicts and humanitarian crises across the world – Jewish Family Service of San Diego stands at the ready to Welcome the Stranger.

Today, more than 84 million people are forcibly displaced worldwide.
Less than 1% have returned or been resettled.

Since 1918, JFS has maintained its commitment to welcoming refugees from around the world. From the moment a refugee arrives in San Diego, our dedicated staff and volunteers work with them side by side to build stability and adjust to a new culture and way of life.

On any given day, we help families enroll their children in school; gain proficiency in English; learn to navigate banking systems, public transportation, and community resources; further their education; find permanent employment; and become contributing members of the community. Together, we empower refugees to rebuild their lives and create a brighter future for their families.

You can help ensure San Diego remains a welcoming place for those in search of a safer life—free from violence and persecution with a gift to JFS’s Welcome the Stranger Fund.

“The story of today’s refugees is really the story of all of us—and for those who have lost everything, one act of kindness can make all the difference.”

A refugee is someone who has been forced to flee his or her country because of persecution, war or violence. Most likely, they cannot return home or are afraid to do so. Today, there are more than 25.4 million refugees worldwide. More than half are children under the age of 18.

A person in the United States or at a port of entry who is found to be unable or unwilling to return to his or her country of nationality, or to seek the protection of that country because of persecution or a well-founded fear of persecution.

Because of their cooperation with the United States military, individuals who served as translators/interpreters for U.S. troops in Iraq and Afghanistan often become targets of violence and persecution in countries, making it unsafe for them to remain. The US government created the Special Immigrant Visa (SIV) program to allow them to resettle in the United State as permanent legal residents while receiving the same services as refugees.

The federal government’s objective is for all refugees to be self-sufficient within 90 days. Before a refugee even arrives to San Diego, JFS resettlement staff are making the necessary preparations to welcome them to our community. During their initial 90-day Reception & Placement (R&P) period, we provide the core services required by the federal government and continue to assist as them on their journey towards self-sufficiency.

The Refugee Journey to San Diego

Refugee Resettlement is a complex, multi-lateral system. The U.S. Admissions Program determines how refugee resettlement operates in the United States. Some of the Parties involved in the refugee journey are: The United Nations High Commissioner for Refugees (UNHCR), the International Organization for Migration (IOM), the U.S. Department of State, the U.S. Citizenship and Immigration Services (USCIS), 9 National Affiliate Resettlement Agencies, and local resettlement agencies such as JFS.

Once a case has been referred to the United States by the UNHCR, the U.S. Government screens the refugee and determines whether it would like to admit them for resettlement. Depending on the location where the refugee will be resettling, the case is referred to one of 9 National Affiliate Agencies, who then refer the case to local resettlement agencies such as JFS.

As our National Affiliate, HIAS works in partnership with JFS to ensure the safety and successful resettlement of refugees referred to San Diego County. We are proud to share a history and ongoing commitment to the Jewish value of Welcoming the Stranger.

The Lautenberg Amendment was first enacted in 1990 as part of the U.S. foreign operations budget to facilitate the resettlement of Jews from the former Soviet Union and allowed HIAS to bring tens of thousands to safety. As the world refugee situation changed, the Lautenberg Amendment was expanded to include persecuted religious minorities in other countries, such as Jews, Christians, and Baha’is from Iran. Despite being a crucial part of U.S. refugee policy, it expires each year and must be reauthorized. (Source: HIAS)

Contact us to learn more. All communication is confidential.

HOW YOU CAN HELP

Resettling a refugee can be a years’ long commitment. It requires the coordinated action of international and local agencies – and the compassion of everyday people, who give their time and support to helping families overcome difficult pasts and move toward a more stable future. From helping newly arrived families learn to use public transportation, to giving a few dollars each month, there’s a part for all of us in Moving Forward Together.

These services are provided with the help of our local and national partners.

Donate to Center for Jewish Care >>

Donate to the Welcome the Stranger Fund >>